Every year, Lands for Auroville Unified (LFAU), Acres for Auroville and GreenAcres design and publish a New Year’s card. This card has become an important occasion for us to communicate something of the spirit of Auroville. It is sent to all our land donors, supporters, and made available to Aurovilians, to visitors to Town Hall, and to buyers of books at Visitors Centre and at the Auroville Information Service. It is first sent by email, and then mailed out by the Postal Service. The costs for Indian and international delivery are paid for by a benefactor.

We express enormous gratitude to Aravinda, who, along with Jasmin, has designed the card, spending many intensive hours in the wee hours of the morning after all his other work for Auroville.

Several Auroville photographers generously contributed their works, and we sincerely thank them all. This year’s final photo choices went to:

– for the cover page: Auroville youth Om and Julie who provided their drone photo capturing a vast green view of the landscape starting from Matrimandir, beneath the grandiose dawn sky.

– the second page photo – was provided by Marco Saroldi of a solemn candlelight meditation welcoming the new year at the Pavilion of Tibetan Culture. 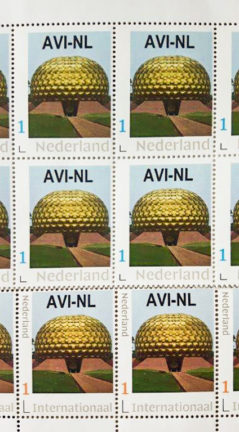 – the quote on the 3rd page highlights in beautiful words the presence and power of the light of the inner soul as described by the Mother in a speech in Japan during the early part of the 20th Century.

The card was officially released by Rathinam, a long-term executive of the Auroville Unity Fund.

Because of this year’s COVID limitations, the cards to foreign donors had a complex road to delivery – sent from India to the Auroville International center of different countries (at no cost to Auroville thanks to our anonymous benefactor). Each AVI then generously paid for the postal costs for the donors within their countries. AVI Netherlands/Belgium created their own stamp that they used for sending out their cards.

Our sincere thanks go to them and to all the AVIs for their collaboration.