You are here: Home / News / European Plaza in the International Zone

On the auspicious day for Auroville 21 February 2015, in the International Zone, the forthcoming “European Plaza” is inaugurated, by planting a tree whose roots will grow on soil brought over from 44 countries in Europe.

Music, chanting, meditation and brotherly harmony are nurturing the growth of this tree as well as the aspiration towards the manifestation of the European Pavilion to express the soul of Europe in Auroville.

AVI EUROPE communiqué: The ceremony of the European pavilion groups has taken place in the afternoon of Sunday February 21, and was attended by an unexpected big number of 160 people, – Aurovilians, friends and guests.

In a beautiful atmosphere – concentrated and charged with the aspiration for freedom, peace and unity on the European continent and in the world at large, but also light and cheerful with little musical performances – a tree was planted (Alstonia Scholaris) to mark the beginning of further development in the European area of the International Zone.

Soil from 44 European countries, collected in the months preceding the occasion, was brought to the ceremony, mixed with soil from the Samadhi and given to the Auroville soil with the sincere wish that it may nourish the tree and also our own dedication and joy of togetherness. 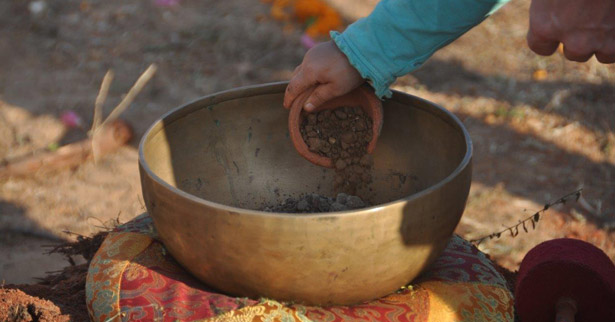 As a companion to the tree, a stone sculpture has been erected close-by: it’s a combination of white marble pieces from Matrimandir that originally hail from Italy, and a dark gray shell lime stone which is endemic all over Europe. The central marble piece carries the Mother’s name Mirra in Sanskrit, a symbol with great protective power, as described by Her.
Protection is very much needed, for the International Zone as well as for Auroville’s overall integrity, so it is hoped that this little ceremony will have its positive repercussions in the future!