The bi-annual Open Meeting of AVI UK was held at the beautiful Manor House in Bygrave, Hertfordshire. There were approximately 25 adults and 15 children in attendance. There was a mix of people who had long standing connections with Auroville and people who were coming across it for the first time.

The theme of the day was water, in light of the difficult water situation that Auroville and the bioregion are facing at the moment. The objectives of the day were:

The day was interspersed with a mix of formal presentations, discussions, sharing of personal stories and a walking meditation.

The day was split into two hour-long sessions: morning and afternoon with a shared lunch in the middle.

In the morning session Aurama and Angiras welcomed everybody and after a short round of introductions there was a presentation and video on Auroville. Vikas, Thakor and Angiras shared their stories of their relationship Auroville. This was followed by a short exercise in feeling ourselves as energetic beings and how our thoughts and feelings change our energy. This was followed by a short question and answer session.While the adults were suitably occupied, Jane Opegaard, who runs yoga session for children, had them all outside doing yoga and learning a routine which they would present to the adults at the end of the day, as well as making hanging mobiles. 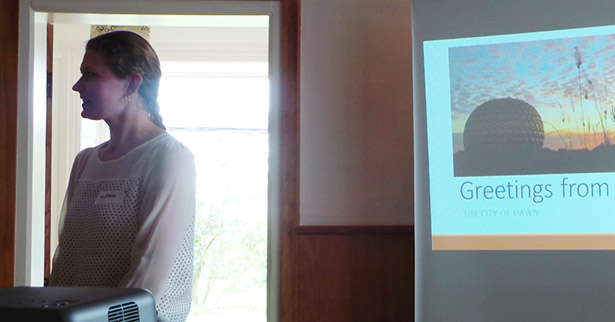 Aurama making a presentation on Auroville

Over lunch, that everyone had contributed to, people mingled and were able to find out more about each other and Auroville. For most of us there were familiar faces and it was a great opportunity to catch up, as well as make new contacts.

After lunch, Auromira read the story of The Wave by Renu Neogy to all the adults and children. Everyone then picked up a cup of water and we did a walking meditation to bless the water, which we closed by drinking it. This was followed by a demonstration on what happens to water in singing bowls, to illustrate the effect vibrations have on our bodies, being 70% water. 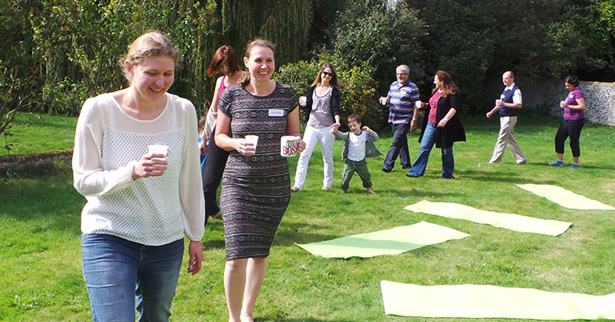 The adults returned to their seats to watch a presentation by Aurama on the water situation in Auroville and the Bioregion. This was well received and brought up a few interesting questions.
Angiras then gave a short presentation on the work of AVI UK and it was then opened up for discussion about how we could develop this further. This was followed by an intense discussion and there were some interesting ideas.

It was evident that our first priority is to build up a database of interested people and it was necessary to develop strategy for actively engaging them – primarily through the use of social media.

The children had a second yoga session in the afternoon, though were more interested in the trampoline. And at the end of the day they gave us a small demonstration of the water based yoga routine that they had put together, which was lovely. 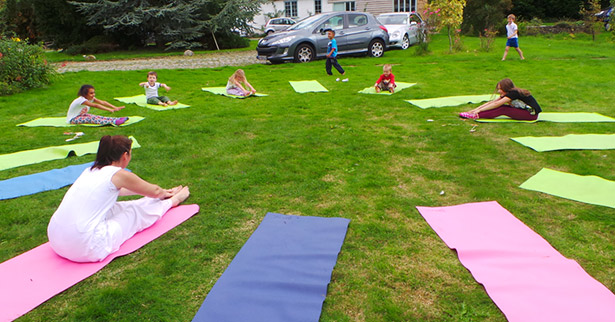 The day closed with a moment of silence and we thanked everyone for coming, Anna Clifford for the use of her beautiful house, Auromira for reading the story and Jane for doing such lovely activities with children and guiding our walking water meditation.

Feedback at the end of the day was very good. And though there was certainly room for improvement and changes, the outcome was excellent.

For those who knew nothing about Auroville we raised their awareness, and they wanted to know more and were keen to arrange a date to watch a full length video. They were keen to buy books and even had ideas for engaging with their children’s school.

For those who knew a lot about Auroville we raised their awareness of the water issues in Auroville and three of the first generation Aurovilian children (who are now adults) are happy to get more involved in the activities of AVI UK.

Points of action include developing a strategy for capturing contact details of people interested in Auroville, through Auroville itself and within the UK, and then keeping them engaged, probably through social media.

Report of the Auroville International Meeting 2020 in Auroville