You are here: Home / About / Introduction to Auroville

“Auroville wants to be a universal town where men and women of all countries are able to live in peace and progressive harmony, above all creeds, all politics and all nationalities. The purpose of Auroville is to realise human unity.”

This was the first public statement on Auroville, given out in 1965. 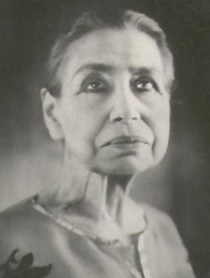 Mirra Alfassa, known as The Mother

The concept of a universal / international township devoted to human unity originally sprang from the writings of India’s great philosopher-yogi Sri Aurobindo. However, it was his spiritual co-worker Mirra Alfassa, known as The Mother, who first gave it more concrete form, by naming it ‘Auroville’.

Next in 1966, the concept of Auroville was put before UNESCO by the indian Government, and was unanimously endorsed (repeated in 1970 and 1983). Two years later, on 28th February 1968, youth representing 124 nations and all the Indian states came together to inaugurate the township and receive its charter.

Auroville is a planned universal township for up to 50,000 people under development in south east India, located by the Coromandel Coast some 10 kilometres north of Pondicherry. 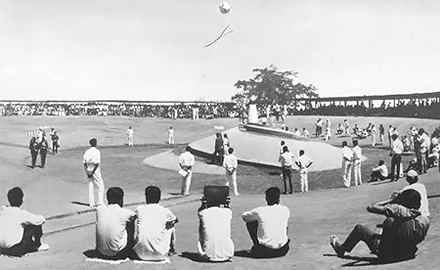 Aspects of Auroville can be found in other projects and communities around the world, but Auroville is the world’s first and only internationally recognised experiment in human unity, also concerned with – and practically researching into – the future cultural, environmental, social and spiritual needs of mankind. Its global importance is emphasised by the fact it has been endorsed by UNESCO and other international bodies, and enjoys the full support and encouragement of the Government of India, its host nation.

In 1988 the project was given special status by the Government of India, when the ‘Auroville Foundation’ was created by Act of Parliament. There are three separate but interacting bodies which comprise the Auroville Foundation, a Governing Board, an International Advisory Council and a Residents Assembly, the latter being all Aurovilians on the Master List of residents aged 18 or over. 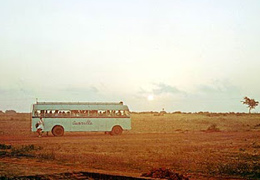 The problem of erosion on early AV land

The site chosen for Auroville was a severely eroded low-lying plateau extending eastwards to the sea. An early priority for Auroville was the environmental regeneration and reforestation of the area, which in the late sixties was described as being in “an advanced state of desertification.” Thousands of trees and shrubs were planted (to date over 2 million) and erosion control begun, with the result that the area now has a green and semi-forested landscape. Alongside this work, emphasis has always been placed on development using non-polluting appropriate technology and sustainable energy generating systems. 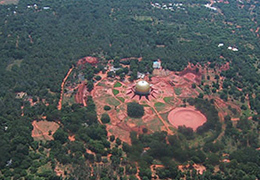 The expanding Auroville community today numbers nearly 2000 residents from over 30 countries. Known as Aurovilians, they live in some 90+ settlements of varying size and character, established on areas of Auroville land interspersed with village land over an area of 20 square kilometres. They are engaged in diverse activities in the fields of agriculture / greenwork, education, health care, village-outreach, commerce and administration. All are volunteers who either receive a monthly basic `maintenance’ in local rupees, or pay for themselves partly or entirely as a contribution to the project. 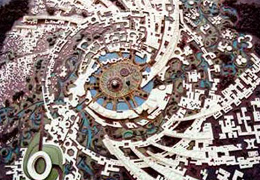 The plan for the township, based on a spiral galaxy shape, incorporates four radial sectors (the International, Cultural, Industrial and Residential Zones) and includes a surrounding Green Belt. The 4 zones have as their focus a huge globe-shaped structure at the geographical centre of the township called the Matrimandir, the `soul of the city’, a place for silent concentration, to be surrounded by an area of beautiful gardens. 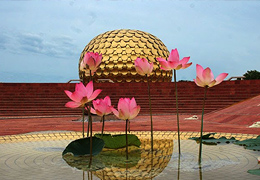 Auroville has already gained national and international acclaim for its environmental work. Hundreds of acres of forest cover have been created; indigenous flora and fauna have been re-introduced or have returned naturally; tree seedling nurseries have been set up; and comprehensive soil and water conservation practices have been introduced. The development of ecologically sound agriculture without the use of pesticides and detrimental chemicals, plus application of up-to-date agro-forestry techniques, is also being actively pursued.

Alongside all this, Auroville is currently master-minding a major project to de-silt and renovate the complex of artificial lakes (known locally as tanks) associated with the villages in the area, which will greatly improve their water holding capacity and help to stabilise water tables. Auroville is also involved in raising awareness of the dangers of salt intrusion in the immediate coastal zone caused by over-pumping of ground water, and is cooperating with the Indian authorities on the siting of wells and ways to reduce water extraction rates.

The Centre for Scientific Research, an institution recognised and approved by the Government of India since 1984 for its development work in appropriate technology, in particular for its use of ferro cement technology for buildings, is another focal point for future-oriented activities, together with the Auroville Building Centre (AV-BC). The latter is part of a national network of over 450 such centres initiated by the Housing and Urban Development Corporation of India (HUDCO). AV-BC provides regular training programs, offers consultancy, designs buildings and supervises construction incorporating its own cost-effective compressed mud brick technology. In 1992 it won the Hassan Fathy International Award for Architecture for the Poor; in 1995 it received an Outstanding Performance Award from HUDCO for its activities; in 1994 and ’95 it was recognised by The Indian Ministry of Urban Development as the Best Building Centre in India; and in 1999 it received a gold medal for ‘Excellence in presentation of special display on Building Technology’ at the India International Trade Fair in Delhi.

Auroville’s multi-cultural educational system endeavors via its five schools to bring out each child’s highest potential. It is increasingly based on a free choice system, which allows the children / students to choose their own subjects for study. Meanwhile, sports and physical education are also strongly encouraged for the balanced and healthy growth of the child, plus artistic training to develop aesthetic faculties.

In addition to the children of Auroville, about 700 children from the surrounding villages benefit from Auroville’s educational programs via another half dozen schools established and overseen by Auroville.

Together with allopathy and dentistry, many other systems of primary health care are in use, including homeopathy, ayurveda, physiotherapy, acupuncture, reflexology, polarity, massage and other therapies, most of which are offered at the ‘Quiet Healing Centre’ facility located by the beach.

The Auroville Health Centre, equipped with basic medical facilities and staffed by a multi-national team of doctors and administrators, serves the Auroville community and about 200 local patients daily via its main building and some 10 village-located sub-centres. More than 30 local women health workers, trained by Auroville, are also active in 17 nearby villages, giving first-aid, advising on home cures and basic health education, and encouraging better nutrition by way of small family gardens in the villages. Auroville also conducts regular training programs in dentistry via its two clinics.

These units have an important role to play in achieving eventual self-sufficiency for the township. Meanwhile, besides generating funds to assist the community in maintaining its basic services and infrastructure, the units also provide employment and training for large numbers of local villagers, enabling them to improve their standard of living and acquire valuable skills. At present, some 4-5,000 local people are employed in Auroville, with considerable financial benefits to the surrounding area. (An estimated minimum of 1.5 lakhs rupees – over 3,500 U.S. dollars – is fed out from Auroville into the local economy every day, the equivalent of around 4.7 crores a year, or well over a million U.S. dollars.)

Auroville maintains a totally non-hierarchical society. Bodies like the ‘Working Committee’ are elected annually from volunteers willing to dedicate themselves to meeting the basic administrative needs of the community, but have no on-going power. Most major decisions, specially of a controversial nature, are taken at ad-hoc Residents Assembly or ‘General’ meetings, where all Aurovilians are equally free to express themselves.

Auroville represents a real hope for the future of humanity, as the only place on earth where an ongoing non-political experiment in human unity is under way on behalf of all mankind, alongside other important work. The project has been steadily growing in size and scope for over 30 years now, and continues to do so with increasing momentum.